Tome 2: Le Vertige du Rhombus // The Vertigo of the Rhombus 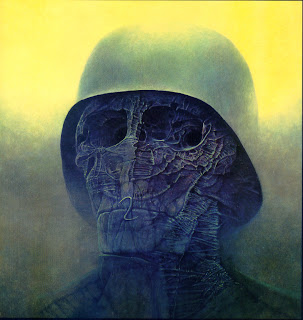 Today, on my birthday (I will not say how old!), I have decided to give you a short update on my current work: the second volume of "The Masters of the Storm", The Vertigo of the Rhombus.

I don't want to say too much:

2) because what I tell you here will not be the gospel truth - indeed as the characters come to life, they often lead me in directions which I did not expect...

As it's my birthday, and since quite a few of you have shown interest... here below is a  broad-brushed summary of the story, which will give you a rough idea of ​​where the plot will take us.

In the second volume, The Vertigo of the Rhombus, there are two parallel narratives, one in 1942 and the other in 2012, and we rediscover Marwen and Gaël through the eyes of two new narrators. In 1942, France and the Green Island have been under German control for two years. The narrator is Anne, sister of James, a secondary character in the first novel. Having fled Paris, Anne arrives on the island to seek refuge with her grandmother, the Lady of the Manor, Madame de Tréharec. Meanwhile, in 2012, Arnaud, the second narrator, spends a summer on the island where he is going to make extraordinary discoveries, not only about the past but also about himself.

While the first volume was speaking of legends and superstitions, the second volume is more about science: the positive and altruistic science of Anne de Tréharec's grandfather, a friend of Nikola Tesla's, against the destructive, occult and inhuman science of the Nazis, who have set up a clandestine research laboratory on the island.

Several people disappear under strange circumstances, justifying the ancestral name of the island, Enez Disrann (the island of disappearances), thus feeding the islanders' fears and superstitions. Anne and Marwen's quest to find the missing people brings them to discover a mystery that affects Gaël, and leads them to the enigmatic "Rhombus", the infernal secret of the Nazis.
In the background to all of this, invisible to almost all (but glimpsed by Marwen at the end of the first volume), the brooding shadow of absolute Evil still threatens...

Now, it's back to work for me!  Thanks a lot for your visit and à bientôt!

Email ThisBlogThis!Share to TwitterShare to FacebookShare to Pinterest
Labels: Le Vertige du Rhombus, The Vertigo of the Rhombus, Tome 2 de la trilogie, Volume 2 of the trilogy