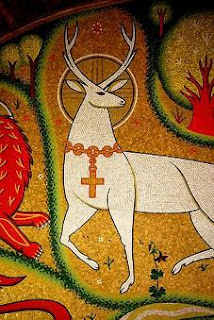 Presentation of the site:

Given the abundance of books published every week, how can you find the right one? 123loisirs is a site that reads them for you and offers a selection of quality books, carefully analysed for you. What you save is valuable time and you can give your children and teenagers the taste for reading.
See our list of favourite books by clicking on "Our favourites" and our list of topics by clicking on the theme of a book to help you in your search.

L’Ile Verte: a small island off the coast of Brittany battered by the sea and swept by frequent and terrible storms, with a brooding old castle, a dense and mysterious forest where Maïa the witch lives, a White Lady and the persistent legend of a bloodthirsty beast who rips its victims to pieces and then tears out their eyes and heart... The story begins in September 1939 with the start of Second World War. Dr. Goulaouenn‘s family has just moved to the island; Marwen, the eldest daughter, is twelve years old. Anaïk, her little sister, is a delightful baby. The doctor’s mobilization is a blow to all, but Mrs Goulaouenn’s cry of distress that Marwen overheard from the top of the stairs has another origin. An avid reader of adventure novels, the almost-teenager, to whom her father has entrusted her mother and sister, collapses in tears after a horrible first day in her new school. Fragile and mature at the same time, Marwen has a strange companion, the Manac’h. Invisible to all but her, he is extraordinarily faithful and perfectly mysterious. Gradually visions impose themselves on Marwen: a six-pointed star, a white hooded figure whispering to her... And the dark and menacing forest that holds an irresistible attraction for her.

A well deserved “Favourite” for a first volume full of promise: the beginning of a thrilling quest, solidly built and served by high quality writing. The suspense is developed, subtly measured between elements of history, Breton legends and fantasy. The dialogues ring true; the characters are nuanced. The intervention of the fantastic does not affect the shrewd observations on the people and customs of l’Ile Verte whose mysteries deepen from page to page. The young heroes are extremely endearing and natural. In short, these are all the ingredients that made the extraordinary success of Harry Potter, without being in the least a pale imitation. An undeniable success that promises hours of great reading if the sequels confirm the talent of the author.

From “Lire sur les remparts”: the blog of Dinan library’s official reading group
August 17, 2012
The Mark of the Storm (Volume 1 of the trilogy: The Masters of the Storm)
Véronique David-Martin

"The door is inside", which is the motto at the entrance of the church in Tréhorenteuc (an invitation to a grail quest inside ourselves), could be applied to the book's heroine, Marwen. She has always been different from other children, because of her fragile health and the presence of the Manac'h which, a bit like the heroine’s daemon in Northern Lights, never leaves her: "He was without substance, like a ghost or a sheet of mist. She perceived him only vaguely, a blurred, indistinct shape in the sunlight, or a glimmer in the shadows of the night. He was neither a person, nor an animal, nor a thing. And yet there he was."

Her life takes a decisive turn when she moves with her family to l’Ile Verte, off the coast of Brittany. We know, from Robinson Crusoe (and even more since Michel Fournier’s Friday, or, The Other Island), that an island is a woman, well beyond its grammatical gender1, and an incarnation of Mother Earth. Here her priestess is Maïa, considered a witch by the islanders and who will reveal to the adolescent the singularity of her fate: "But I have to confirm that from the signs you are the Chosen One. There's nothing you can do about it, neither can I"; “She told me that in my girl’s body, there is a very old soul, that this soul is wise and will know what to do when the time comes. She told me that her role is to prepare the girl that I am to become strong and educated enough so that I can be worthy of my soul."

The author knows how to impart mystery. The reader guesses that the tale of the two princes, new Cain and Abel, is a clue to the rest of the story. The beginning is traditional: the elder brother murders his sibling, whom the king wants as his successor, and, as punishment, is petrified by the fairies. What follows is less so: the fairies have failed to extinguish the hatred that consumed the bad brother and it would be reborn, if someone came to revive him. The good prince, who has become a being of the Other World, decides to be transformed into a standing stone too, in order to prevent harm in the case of his brother’s waking. Similarly, the heroine must fight various forms of evil, both real or fantastical: the Nazis arrive in Brittany at the end of the story and the Beast roams the island as cruel as the Gévaudan Creature2: "Wounded, exhausted and without any hope of victory, I was going to deal it a final blow before I died when my scroll turned into lightning and struck it. I saw its form freeze a moment in the air before disappearing: a giant dragon with vast wings monstrous and as black as blood. Where he had stood, three columns of grey smoke remained suspended in the air for a moment."

If the movie Star Wars has been called a "Space Opera", the term "Fantastic Opera" could be applied to this novel whose themes are similar to musical patterns, obsessive like the star in the story: "...a six pointed star. The symbol, I think, of a very ancient order of chivalry, like the Templars." Like Chateaubriand’s hero (who seeks to give meaning to his life): "Rise swiftly, longed-for storms that will bear me into the realms of another life!"3 Marwen is fascinated by the fury of the elements (the harbingers of evil forces?): "She loved the beauty and intensity of the storms. She was not afraid. Instead, from the comfort of her cosy bed, she enjoyed them as a delicious poison, potentially deadly but innocent in small doses."

What’s left for the reader is to follow Marwen in her quest, which will deepen in The Vertigo of the Rhombus and will reveal its meaning in The Voice of the Egregor. Just as the white stag – a character in the novel that reveals the existence of another world (I refer you also to the Odorico mosaic4 in the Tréhorenteuc Grail chapel), the reader is invited to "explore the depths of the human heart, its darkness, but also and especially its light, with its ineradicable hope that transcends him and pushes him beyond own limits", as the author explains so well.

1 1-   “Une île”, an island in French, is a feminine noun.
22-  The Beast of Gévaudan (French: La Bête du Gévaudan) is a name given to a man-eating wolf-like animal alleged to have terrorized the former province of Gévaudan (modern day département of Lozère and part of Haute-Loire), in south-central France from 1764 to 1767.
33- Quote from René (1802) by François René de Chateaubriand (one of France’s great authors, born in Brittany).
44-  Below, the white stag mosaic by Odorico in the Grail Chapel of Tréhorenteuc (in the mythical Breton forest of Brocéliande, i.e. the forest of Paimpont near Rennes).

This review was also posted in the “Favourites” section of Le Grenier's website (the first bookshop in Brittany to be specialized in children and YA literature - since 1978): www.librairielegrenier.fr/product.php?id_product=259


For a wonderful in-depth review of The Mark of the Storm, written by talented author and teacher, Jean-Claude Texier, click HERE!

A wonderful review left in English on Amazon.uk by British author (he is a very talented illustrator too), Thomas Taylor: 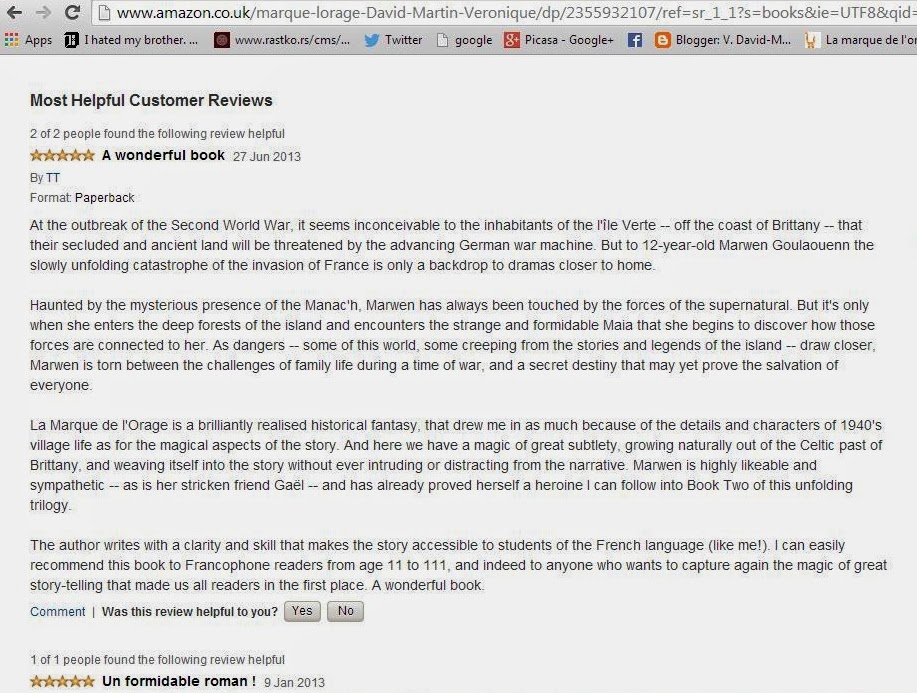