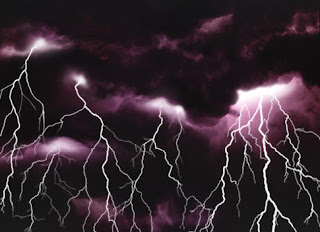 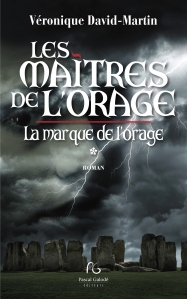 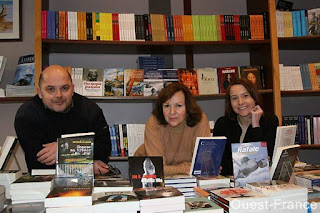 Virtual launch party for the release of my novel "The Mark of the Storm" in France today!

WELCOME to Marwen's world!
At the dawn of World War II, on Enez Disrann, the island of disappearances, ancient legends, ferocious storms and dark mysteries ...

To mark the release of my novel The Mark of the Storm today in France (yay!), I interrupt my work on my second volume to invite you to join me on this page of celebration.

A big thank you for your visit, and I sincerely hope that my story will be translated into English. It is available in France from today in all good bookshops and online at the usual addresses. It may become available in French on Amazon UK (my publisher is looking into it).


Here is the cover that represents so well the mysterious mood of the book:

Here is a short extract from the book (a draft translation) just to give you a wee taster:


Marwen was shivering. Although her wet clothes made her cold, it was mainly because her nerves were relaxing after being stretched to their limit. If she could, she would have huddled in a corner and slept a moment to recover. But she did not allow herself this indulgence. She had escaped from the flooded well but still had to find a way out of the tunnels and try to save Anaïk. She absolutely could not let herself go.
Painfully, she stood up. When she touched it, she felt her knee had bled again since her last fall. The handkerchief around it was saturated with blood but she had nothing to replace it with. Galvanized by her fear for her sister, and by the feeling of having a job to do, she no longer felt the pain as much as before.
The small lights sprang up in front of her indicating the way forward, as if they suddenly recognized where they were. The Manac'h was still floating by her side, dull, faithful and indifferent.
Marwen did not feel very stable on her legs. She leant against the wall for a moment before following the lights. The gallery was long. Contrary to the well, it seemed to have been carved in the rock by men. This reassured Marwen. If people had built this passage, there should be a way out.
At last she saw an archway down the corridor. The lights disappeared through it and rushed into the next chamber. Marwen found herself in the dark.
A bright spot appeared in the distance. It came up to her at a tremendous speed and stopped before her just in front of her face. She recognized the six-pointed star that she had not seen for months, except in her dreams.
The shining star began to turn on itself and Marwen was seized with a giddiness that had nothing to do with altitude or fear. Then the star vanished as quickly as it had appeared.
Marwen staggered, shocked by the contrast between darkness and light. She closed her eyes. Light spots floated for a moment under her eyelids before disappearing. When she opened her eyes again, she knew she had lost her sight. It was not only that she was in the dark but that deep inside herself she knew she’d become blind.
A terrible fear engulfed her. She had been warned by her father never to look too long at the sun.
"Even during an eclipse," he had said, "you can be blinded by sunlight. Man is made for medium experiences. For medium sound frequencies, average brightness and average temperatures. We are creatures of the middle and yet we still believe ourselves superior to other species."
Marwen had not looked into the sun but had stared at a supernatural star. The result was the same. Her eyes were burned by the star as were Michael Strogoff’s, in the Jules Verne novel, by a white-hot sword.
Terrifying thoughts jostled in her head. Was the star the reason why Maïa the witch had become blind? Was it the price to pay for the gift of second sight? Or was it the branding with which the forest marked its servants, as the thunderstorm branded his own with a three line mark on their skin?
Marwen's heart was pounding. In the Bible there was mention of the mark of the Devil. But nothing about the mark of the Lord. She moved forward, holding the wall to compensate for the loss of her sight.
"What does it mean?" she shouted to the solitude of the corridor. "Does it even make sense?"
Scarcely had she spoken that an echo came back.
"Sense.. sense ... sssseeeeennnnssse ..."
Marwen shuddered and stumbled on a shallow downward step. She only just managed to regain her balance and began to grope blindly around her. But she felt nothing. There was no light, no sounds, no walls. Nothing.
"Tell me what to do," she cried in a vacuum. "I don’t understand anything!"
At these words, her sight returned as instantly as it had been brutally removed. What she discovered around her was nothing short of extraordinary.


And finally for those of you who have not yet seen it – and for those who want to see it again! - the book trailer (with music by Westwind – a very talented fellow Breton):


So to all of you WELCOME to Marwen's world, on her island, Enez Disrann, the island of disappearances, ancient legends, ferocious storms and great mysteries ...
Posted by V. David-Martin at 10:41 AM 2 comments 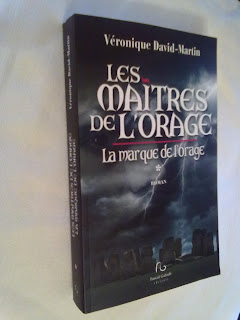 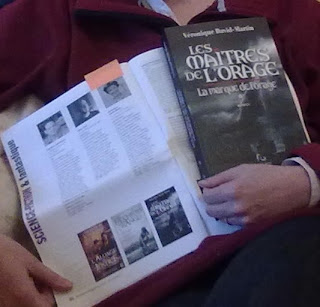 It will be truly out in the world (or at least in France!) on 20 April 2012. Thanks to those of you who can read French for reading it, and to those of you who can't for keeping an eye on this space and (I hope!) a future translation into English. You are all so important, because a book without its readers is only half born!

Why most French novels leave the British public cold.


Last week, three weeks -- no, two! OMG! -- before the publication of my novel in France, I had decided to publish on this blog a short interview where I talk about the key to my inspiration i.e. the desire to write a book that transports the reader into a world like ours, but with added dimensions for their reading pleasure and also to help them open the doors of their creativity (their own power to imagine). A chance encounter with an interesting newspaper article has slightly altered my plan: I’m publishing the interview but also this here post.

Unfortunately it seems almost cliché to say that, at the moment, life is not easy (has it ever been?) but it is undeniable that the bleak economic climate, the general insecurity that is latent at best, and the death of many of our dreams, create in us a deep need for something better or, at least, for something else... This post isn’t an ode to the magic of books, but it's pretty close.

While surfing the net (for most writers, a mixed blessing, as it's both a wondrous Ali Baba's cave and a black hole that attacks the very fabric of time!), I came across a fascinating article in the Guardian (a major British daily).

This article was trying to understand why French books that had done very well in France were welcome with only very weak (if any) interest by the British public. For years, I’ve asked myself this same question of why France, though an international literary bright light in the past, is no more now than a dim glimmer in the Milky Way of the artistic world (except for its films).

The author of the article, who is very measured and not at all damning in her analysis, quotes several experts and, through them, highlights certain aspects which, to me, really deserve to be considered.

First, the lack of interest in many French fashionable authors for the art of story telling (that which gives the reader the desire to learn more), preferring instead concerns of a more intellectual and abstract nature to the pleasure of reading. What I find amazing about this is that our great authors of the past mixed gleefully the seductions of a good story with profound philosophical or sociological insights. The one was not sacrificed to the other. For me, this should still be the case, the richness of a book's content should not exclude the pleasure of reading it. I think that this point illustrates the fact that in many ways France has not yet gone beyond its post-war postmodernism (which advocated the death of story and history, etc.) and that as a result its literature is stuck in a narrow dead-end of self-censorship and endless self-referencing.

Following on this, the author of the article also addresses the very French tendency of the "author-protagonist", who describes his/her life in great detail and tirelessly portrays himself/herself as the main protagonist - a form of egocentricity that, in my experience, is not in harmony with the Anglo-Saxon temperament.

The article ends with a strong and valid statement, which proves to me (if needs be!) how, despite my ever French soul, my mind and heart have truly become Anglo-Saxon:
“Ruppin believes that the most important thing for the majority of British readers is storyline, and the ability to empathise with protagonists in the story. ‘Being asked in our fiction to question the whole premise of our culture is not necessarily what we're looking for, whereas maybe the French are. The cliché is of a man in a beret with a cigarette and red wine deliberating the meaning of life deep into the night – that's not the British way.’”

Isn't it high time for France to recreate a place for itself in the international literary world?

PS: The irony for us, French people, is that our book market is absolutely swamped with French translations of Anglo-Saxon best-sellers, which the public devour and which the big publishers often favour at the expense of giving a chance to new French voices.

Easter, spring festival of renewal, rebirth and resurrection... Let's celebrate the cycle of nature, of life, and of our growth as humans: privileged inhabitants of our sumptuous planet (with all that it entails in terms of opportunities and responsibilities) and spiritual travelers walking our personal path of initiation within the universal.

HAPPY EASTER to you all!