A wonderful new review of The Mark of the Storm (translated) 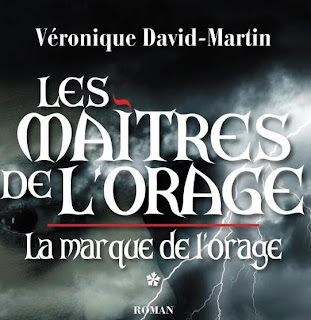 As promised, the English version of the wonderful in-depth review of The Mark of the Storm written by talented author, Jean-Claude Texier, whose excellent novel of politics, redemptive love and corrupted education, can be found HERE:


Every self-respecting writer should ask themselves the question: how much happiness will my book bring to humanity?

In this regard The Mark of the Storm is exemplary. Véronique David-Martin’s novel addresses both youths and adults. There are few artists who have managed to reconcile all ages, and only the greatest have dared to venture there: Dickens, Daniel Defoe, Victor Hugo, Jules Verne ... It is not for nothing that the heroine is a reader of Treasure Island by Stevenson.

The story of Marwen and her painful journey from childhood to adolescence, from innocence to knowledge, from carefreeness to the burden of having a mission - faced with the hostile world of adults, in the climate that preceded then followed the outbreak of the Second World War - is exciting for everyone, even those who have not experienced these troubled times.

A novel of initiation, because Marwen, an endearing character, is different from everybody else. She carries a secret symbolized by the Manac'h, a light-form that follows her everywhere and is only visible by her. She's both a child and the Chosen One, appointed by the Spirit of the Forest to find the prophecy concerning the fate of Enez Disrann, the island of disappearances, also called the Île Verte, a lost paradise where a legendary forest has survived haunted by a bloodthirsty Beast, the personification of evil.

A novel about a quest for identity, for who is Marwen? "Who was I in the past?" she wonders. "Could that perhaps explain who I am now?" Is she really the Chosen One? Or did she unconsciously usurp the role that was meant for her friend Gaël, to whom she failed to give the thunderstone entrusted to her by Maïa the witch? Wasn’t it Gaël whom the hooded figure in white thought he was addressing when he said: "You, you, my little king"? Yet Marwen's path is strewn with symbols: the six-pointed star, the white stag, the white lady, the three parallel lines branded on the thunderstone which haunt the book like an obsessive leitmotif.

A fantasy novel, paradoxically supported by a realistic approach to a social environment steeped in its time, from September 1939 to June 1940. The process tends to lead the reader to the "suspension of disbelief", so dear to the Anglo-American novel, suppressing his initial disbelief when faced with fiction and causing him to be seduced by the truth of situations, descriptions and dialogues: such as the first day of a school year, the atmosphere of a class of girls, the tales of Marie-Louise, the daughter of Joan the washerwoman. Sometimes the fantasy in the story even springs from a naturalistic scene, such as the aggression of the Père Digar and his dog, where Marwen loses a shoe and is left floundering in the mud while trying to escape them.

This realism also supplies a valuable family chronicle, anthology pieces such as the first communion lunch, where the unforgiving eyes of childhood on the adult world spare neither the mayor nor the priest. These judging eyes are even more relentless at the death and funeral of Mamie Constance, Gaël’s grandmother.

A novel about the loneliness of childhood, when seeking friendship is faced with the inability to receive it, such as the one offered by Gaïd, the simple girl exposed to the ridicule of her peers, or the inability to obtain it, as those of superficial Isabelle or  nasty Katel Le Coven. The solitude of the heroine invested with an impossible mission: "I am the Chosen One. One feels lonely at the top."

A novel about feeling unloved. Mirroring the lack of maternal tenderness experienced by Marwen, there is the absence of paternal love for Gaël and the blurring of his identity: whose illegitimate son is he? These lacks weave an affinity between the two children and the bright couple they make, full of bashful love, humour and sibling rivalry, keeps briefly at bay the threatening shadows that are lurking on the island.

The central figure emerging from Marwen’s home life, the character who exsudes all the warmth her mother fails to give her, is her father, Dr Goulaouenn, who is invested with all her respect and admiration. No other author has been able to convey with such power the value of a loving father for a young daughter and the painful experience of his departure to war.

It is therefore natural that Marwen indirectly chooses him as her only confidant by writing her journal in the notebook he had given her to confess her thoughts on the Manac'h. From January to June 1940, the story consists of Marwen’s long private monologue, deprived of Gaël who is in a coma after being struck by lightning. From discovery to discovery, from false tracks to mysterious clues, the story progresses in stages to its conclusion, punctuated by Marwen’s dreams where visions of the Beast, the white stag and the six-pointed star alternate.

The oppressive atmosphere of this quest for the Prophecy is softened by the character of Anaïk, Marwen’s baby sister, who symbolizes hope, innocence, and the happiness of childhood when life is joyous and carefree. Marwen takes the imprudent risk of leaving her on her own in order to accomplish her mission in the mythical forest; a mission from which she later emerges triumphant although deeply affected.

Upon reading this magical and poignant book, I hope that a talented filmmaker will bring it to the screen. He will be seduced by the acute sense of sets and the magical apparitions; the most unusual one being probably the final stage of the quest when Marwen is lost in a trompe-l'oeil forest painted on the rock. This is no small feat for the author to succeed in deceiving us in such a way, and with her talent to take us in a dizzying whirlwind of fantasy after having convinced us that her story was a faithful transcription of reality. Only great artists succeed in doing this.

"Legends are stories that are invented but that started as something real. They are there to entertain us but also to teach us," says Marie-Louise. You learn a lot in this book, one of those rare novels that one never wants to close permanently, and in which new riches are always discovered on rereading.

LINK TO THE ORIGINAL REVIEW IN FRENCH
Posted by V. David-Martin at 4:11 PM

Email ThisBlogThis!Share to TwitterShare to FacebookShare to Pinterest
Labels: Critique // Review, The Mark of the Storm